admin
After a prolonged teaser campaign, the 2021 Rolls-Royce Ghost has been unveiled with a sharper yet evolutionary design and a host of new features.

Underpinning the new Ghost is the same flexible aluminum architecture as the Phantom and Cullinan. For the Ghost, the moveable bulkhead, floor, cross members and sill panels were re-positioned to meet the demands of the British marque’s exclusive clientele, ensuring the Ghost is both enjoyable to drive and comfortable to be driven in.

Powering the luxury car is a 6.75-liter twin-turbocharged V12 engine pushing out 563 hp and 627 lb-ft (850 Nm) of torque. Rolls-Royce says this engine delivers maximum torque from just 1,600 rpm and that it features a distinctive porting in the air intake system to reduce unwanted engine sounds in the cabin.

The engine is placed behind the Ghost’s front axle, providing the sedan with a perfect 50/50 weight distribution. Power is sent through an all-wheel drive system via an eight-speed ZF automatic transmission that features Rolls-Royce’s Satellite Aided Transmission system, which draws GPS data to pre-select the optimum gear for upcoming corners. The Ghost also has all-wheel steering.

One particularly innovative feature of the new Ghost is the Planar Suspension System. This system is the result of ten years of testing and development and incorporates an Upper Wishbone Damper that works alongside a ‘Flagbearer’ system that uses cameras to read the road ahead and prepare the suspension system for any changes in the road surface.

Getting in and out of a Rolls-Royce has always been an event and it is no different with the new Ghost. Rolls-Royce has further developed its trademark self-closing doors that now allows owners to open the door with one pull of the interior handle and provides power assistance on opening. When the door is opened sufficiently, owners let go of the handle and a door brake will automatically engage. With the push of a button on the exterior door handle, the door will close automatically.

Compared to the outgoing Ghost, this new one has grown by 89 mm (3.5-inches) to 5,546 mm (218-inches) and is also 30 mm (1.18-inches) wider at 1,978 mm (77.8-inches). Inside, Rolls-Royce has developed a highly insulated sound stage that sees components that generate almost imperceptible sound waves being tracked and modified. For example, the inside of the air conditioning ducting used in prototypes were determined to be too loud so it was removed and polished to produce less sound.

Elsewhere, the new Ghost comes equipped with an advanced audio system and a new Starlight Headliner that works alongside advanced exciter speakers to effectively turn it into a large speaker.

In terms of the 2021 Rolls-Royce Ghost’s exterior, it has a familiar character but also stands out from the previous Ghost. Found up front is a new grille that includes 20 LEDs underneath the top of the grille that help to illuminate the veins. The new Ghost also includes LED and laser headlights while at the rear there are new taillights with a slightly more striking look. 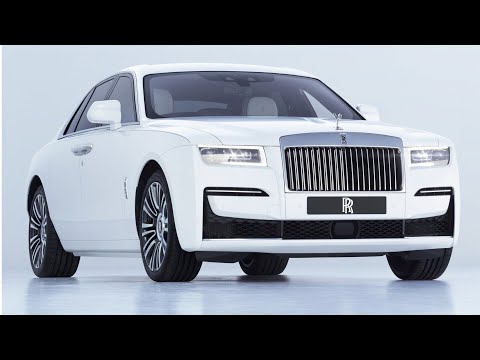 After a prolonged teaser campaign, the 2021 Rolls-Royce Ghost has been unveiled with a sharper yet evolutionary design and a host of new features. Und...